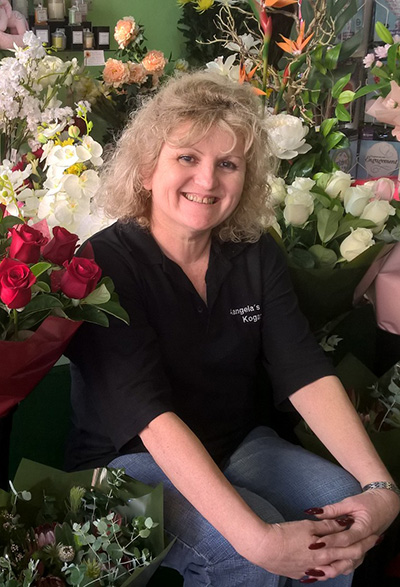 “A florist has to cover a lot of aspects.

They have to be able to talk to people.

They have to be able to grieve with people.

They have to understand.

They have to feel.

They have to Celebrate.”

About Megan Barker and Aangela’s Florist

An Interview with Megan

“I finished school at Year 10.  Because I was a “rat” at school, they wouldn’t endorse me to go anywhere else for years 11 & 12 so I had to find some work experience.  I was working at McDonald’s after school and this lady used to come in to the store regularly.  She was a florist. I don’t think I ever really knew what I florist was, really.  I asked if I could come to her shop for my two weeks work experience.  She said yes and became a life long friend.”

“I stayed with her for seven years!  And then that was from 1981 to 1988.  After that I left her and bought Aangela’s Florist and have worked here all these years until today.”

Why was Megan naughty?

“I was teased as I was a stutterer.  By the time I got to high school I had become rebellious to survive.”

Life As A Teenager

“I had two part jobs after school.  I worked at McDonalds and the local Chinese restaurant.  I also did promotional work at the Leagues Club.”

What did you want to be when you grew up?

Are you glad you became a florist?

“I am!  I love what I do.  I love the shop.  I love the flowers.  I still think I would have made a really good nurse,though, lol!”

A History of Aangela’s Florist

“The Florist was named by a lady that owned it for one year and her name was not Aangela.  She named the shop Aangela’s Florist with a double ‘a’ because she thought the Kogarah community was mainly going to grow to become a predominantly Greek community and the double ‘a’ was good for the phone book.”

“I found this information out about 7 years ago when a lady rang to order flowers and explained that she used to own the store.  She was the original owner and after she sold it the next lady to own it, Marie Jerome, who had the store from 1978 til 1999.”

“Aangela’s Florist started in another street.  I think it was Montgomery Street.  Marie Jerome kept that shop vacant for 10 years while she still had the shop at Railway Parade.  She smoked those long cigarettes, people thought she was smoking cigars in the store.”

When Megan went for a job with Aangela’s Florist in 1988 she had just come off a cruise ship.

“In my previous work experience where I had been in the florist for 7 years I had mainly watched, not participated.  I had not been allowed to touch anything in the store by the florist for whom I worked.  I could really only do a nice round basket.”

“I went for an interview at Aangela’s Florist and made a basket as the owner went out the back.  I asked one of the ladies who worked there if it looked ok?  She quickly changed and modified it with a few flowers. The boss came out and exclaimed “oh that looks lovely, you’ve got the job!”  The lady’s name was Narelle Woods who helped me and she worked there for quite some time with Marie, the previous owner.”

“After I worked there for years I bought Aangela’s Florist on 1 October 1999!”

From the article online

“We know how tough it can be as a small business owner pouring your heart and soul into your business- the long hours, sometimes rarely taking a wage just to build your dream. Megan has run ‘Aangela’s Florist’ in Kogarah and for the past 18 years worked 7 days a week. The only help she has is her 88-year old Mum comes in the shop most days. Last year they booked a 3 day cruise together but had to miss the cruise as she couldn’t afford to close the shop for 3 days. So we came up with a little plan to surprise her #KJgiveback”

Megan says, “Not a day goes by that a person does not mention being on radio.  I call Jackie O my Gift that keeps on Giving.”

What Does Megan Think About The Meaning Of Being A True Florist Today?

Feeling What Others Feel – The Makings Of A True Florist

“I can remember a man came in to order some flowers.  His wife had passed away.  He cried.  He said ‘I have never done this before, my wife used to arrange sympathy flowers and has always done this”.  Megan went and hugged and held him as he cried and grieved with him in that moment.

Florists feel with their clients and feel what they are experiencing.  If you can’t feel it you can’t make the arrangement the client needs.  You can’t be successful.”

What Makes A True Florist?

“A true florist is someone you can call or walk in to the shop & face, speak & interact with.”

The message has already travelled through an intermediary, and like a Chinese whisper, has been changed and has become far removed from the purity of the exchange that a florist can capture when they interact with someone, either speaking with their customer on the phone or in person.

So, the people who take the order, that is not a florist,  They are just a messenger.  The customer speaks to the messenger.  The florist has not spoken to the customer and do not truly know how they are feeling.  I do not think that is a real florist.”

Megan’s mum is always referred to as the ‘senior’ florist.

Everyone calls her mum or nan.

Her real name is Norma Williams.

Find Us, Talk To Us, Email Us, Visit Us

Visit Us In Store

Get In Touch - We'd Love To Hear from You!